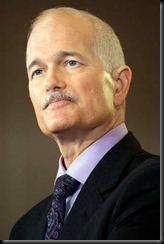 Jack Layton died early this morning, bringing to a halt a resurgence of people based politics that Canada has not seen in Ages. We wish his family the best at this time, and we can only hope that the NDP have someone in the background who can strive to fill his shoes in the future.

From Cory Doctorow at Boing Boing:

RIP, Jack Layton, former Toronto councillor and present head of Canada's New Democratic Party. He was as good a politician as Canada ever had, and better than anyone who's been on any of the ballots I've been allowed to tick for many, many years. Layton died from prostate cancer; he announced his diagnosis in February 2010, and stepped down in July. He was 61.

NDP leader Jack Layton—who, among other things, passionately worked for an open, affordable Internet—has passed away. He will be missed. http://openmedia.ca/

Email ThisBlogThis!Share to TwitterShare to FacebookShare to Pinterest
Labels: friends